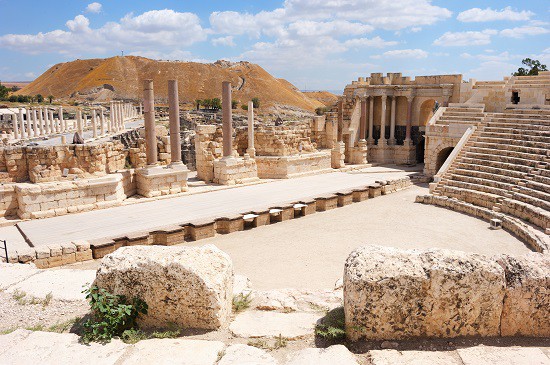 Beit She’an is one of the most ancient cities in the country. It is a historical gem that unfolds the fascinating story of a rich period full of changes, climaxing in the National Park of Beit She’an to the north of the city.

Tel (the Hebrew name for abandoned ruins that often appear as hillocks in the countryside) Beit She’an was first settled way back in the Chalcolithic Period (some 5,000 to 6,000 years ago). The city has had many conquerors, among them the Egyptians some 3,500 years ago. A few hundred years later, the Philistines conquered it (it was they who fastened Saul’s body to the wall of Beit She’an after the famous battle on Mount Gilbo’a: 1 Samuel 31 .8 – 11). Beit She’an became part of the kingdoms of David and Solomon, and was eventually destroyed in a fire, apparently at the hands of the King of Assyria (in 732 BCE).

Beit She’an was rebuilt as a Hellenistic city about 2,300 years ago, and was renamed Scythopolis (“City of the Scyths”). In the succeeding Roman period, it spread south, reaching the peak of its greatness in the fifth century, when it had 30,000 – 40,000 inhabitants. The remains of this magnificent city can be clearly seen at the city’s main site – the National Park of Beit She’an, which is one of the country’s most beautiful and impressive national parks. In the northern part is Tel Beit She’an – the location of ancient Beit She’an. South and east of it are the ruins of Roman-Byzantine Scythopolis, which tell of its richness and greatness.

The city extended over an area of some 370 acres, and you can still see the remains of the wall that surrounded it. In addition, several impressive buildings have been uncovered in the national park, including a theatre (still used for events and shows), a public bath-house (the largest found to date in Israel), two magnificent colonnaded streets, a Roman temple, a decorative fountain building (nymphaeum), a large basilica marking the center of the city, and of course the reconstructed mosaic on which you can see Tyche, the Roman Goddess of Good Fortune, holding the Horn of Plenty.