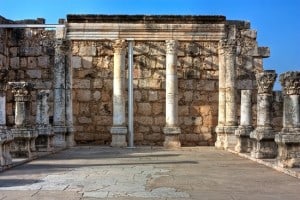 The site of an ancient Jewish town on the north-western shore of the Sea of Galilee. According to Jewish tradition named after the prophet Nahum. This was the center of Jesus’ Galilean ministry, where he called several of his disciples, and performed miracles. The excavations revealed the remains of a Jewish synagogue from the 3rd century, as well as the village houses built of basalt stone. A modern Roman Catholic church, built by the Franciscan Order, stands over the site of St. Peter’s house.