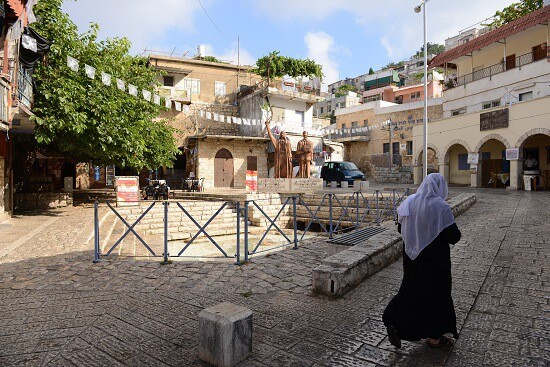 Daliyat el-Carmel is a Druze village high on the slopes of Mt. Carmel and has an exceptionally unique character. It is a colorful village that offers wonderful hospitality with a smile and is also very interesting. The Druze is an ethnic group that split off from Islam in Egypt about 1,000 years ago. According to the Druze, their religion is the renewal of an ancient faith that became a secret known only to the group’s sages. Daliyat el-Carmel was founded in the 17th century by Druze from Mt. Lebanon. To the south of Daliyat el-Carmel is another Druze village, Isfiya, which was united with Daliyat el-Carmel in 2003 into a single town whose official name is Carmel.

Daliyat el-Carmel’s colorful market, open on Saturdays, is only an excuse to come to this special place. On the main street dozens of stores offer their varied wares and one can get lost in the abundance and variety. Between the stores are many restaurants serving genuine Druze ethnic foods, bakeries that fill the air with the sweet smell of baklava pastries. Other food stands sell high quality olive oil, olives, pita bread and locally produced labaneh cheese. The flurry of activity, the colors, the new beside the old, and the village bustling with people are a multi-sensational experience not to be missed. The market also has a few galleries where cultural evenings can be held, alongside the Druze hospitality.