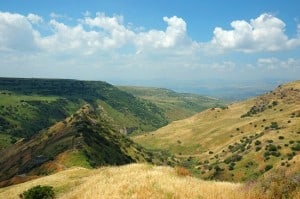 Gamla has it all: a dramatic saga, rugged landscape and magnificent vistas to match, and a wonderful foray into nature, including a waterfall and great raptors soaring overhead.

Gamla is the site of a Jewish city founded in the second-century CE Hasmonean times, located on a craggy basalt outcropping in the western Golan Heights.

One look at the hump-like shape of the hill is enough to understand why it was called Gamla, which comes from the Hebrew word for camel. Two thousand years ago, the Jewish historian Josephus described the siege of the walled city of Gamla by the Roman general Vespasian, who marched across the Galilee to subdue the Golan in 67 CE at the beginning of the Great Revolt.
Seven months later, the Romans overcame the walls and streamed into the city. Josephus says the 9,000 remaining inhabitants fought their way to the edge of their town and threw themselves to their deaths into the gorge below when they realized they could not avoid capture. This element of the story has led to the site’s nickname, “the Masada of the north.”
Even a view of Gamla from the observation platform at the top of the trail is thrilling. You can clearly see the walls, the actual tower Josephus says the Romans undermined by pulling out the bottom stones, and the synagogue, one of the oldest ever found. Archaeologists discovered not only these architectural remains, but many other artifacts: the picks the Romans used to climb the walls, thousands of missile stones and arrowheads, as well as coins minted by the rebels stamped “For the salvation of Holy Jerusalem.”