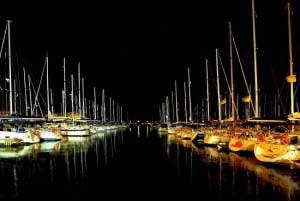 Herzliya (pronounced Hertselia) is named after the visionary of the Jewish state and founder of the World Zionist Federation – Theodore Herzl. Herzliya has three main features. Its beachfront is one of the most popular among both Israelis and foreign tourists, thanks to the many hotels, abundance of restaurants, beaches with swimming areas and organized marinas.

The city’s industrial zone has a concentration of high-tech companies that provide work for a large percentage of the city’s residents. The city also has many fine stores and restaurants and becomes a vibrant entertainment center at night. The attractive malls and shopping centers serve the local population as well as residents of surrounding urban and rural communities, making Herzliya a city alive with energy and excitement.

Herzliya was founded in 1924 as a moshava: semi-cooperative farming community with a mixed population of Israelis and new immigrants. After Israel’s establishment in 1948, the city grew as immigrants flooded the young country. In 1960 Herzliya was declared a city and had a population of 25,000, less than one third of its population today.

The museum of Herzliya’s history, in one of the city’s original houses on Ha-Nadiv Street, documents the city’s growth. Near this museum is Herzliya Museum of Art, housed in the Yad le-Banim military memorial building on Wolfson St.

West of the city is a Muslim holy site called Sidna Ali, which contains the tomb of Ali ibn Alil, a mosque and a number of buildings. To the northwest is the Tel Arsaf (Arsuf) archeological site, where the Apollonia National Park was established a few years ago. This site, which was inhabited from the Persian period (2500 years ago) until the Crusader period (1,000 years ago), has many impressive architectural remains of the Crusader town of Arsur, its fortress, surrounding wall and encompassing moat. Throughout the year, cultural events are held in the park, with music from around the world and festivals in the spirit of the Crusaders including period costumes.