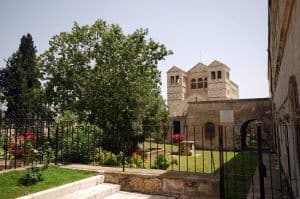 A mountain in the Lower Galilee, on the edge of the Jezreel Valley. This is the traditional New Testament Mt. of Transfiguration, and the place where the army of the Old Testament judge Deborah defeated the Canaanites. Two churches, one Roman Catholic and one Greek Orthodox, occupy the summit.

Between 1919 until 1924 an impressive Roman Catholic church of the Franciscan order named “Church of the Transfiguration” was built on the peak of Mount Tabor. The architect who designed the church, as well as other churches in Israel, was Antonio Barluzzi. The church was built upon the ruins of a Byzantine church from the fifth or sixth century and a Crusader church from the 12th century, which was built in honor of Tancred, Prince of Galilee. The friars of the church live next to the church in a monastery established in 1873.