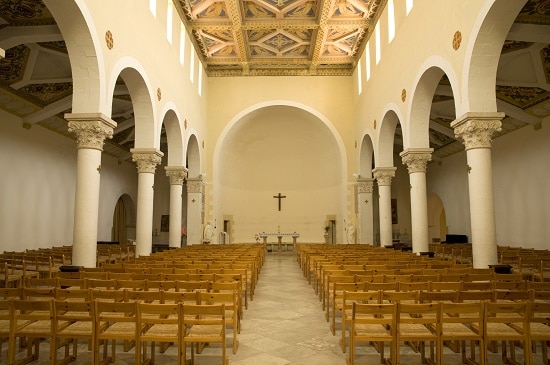 The charming village of Abu Ghosh, with its important Christian connections, welcomes visitors and is just a few minutes’ drive west of Jerusalem.

Beginning in the twelfth century, Christians began to identify Abu Ghosh as Emmaus, where Jesus appeared after the Resurrection (Luke 24:12-31). They imagined an old caravansary they found by the village spring as the destination of the disciples as the walked along the road “about seven miles from Jerusalem” (Luke 24:13).

The village’s impressive Crusader church, in a tranquil garden setting, is built over that spring. Its walls are adorned with paintings of New Testament figures – some of the oldest medieval frescos in the world.

Abu Ghosh has also been identified as Kiriath Jearim, where the Ark of the Covenant was brought after Philistine captivity (1 Sam. 6:21); a church on the hill with a panoramic view marks that spot. A vocal music festival is held in the village churches during Passover week and Pentecost, attracting music lovers from throughout Israel and abroad.