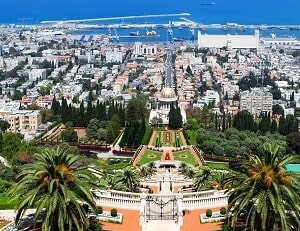 A major port and industrial center in the northern part of Israel, situated on Haifa Bay. The old part of the city occupies the coastal plain at the foot of Mt. Carmel, but since the 1920s the city has spread up the northern and western slopes of the mountain itself. The city has two universities and several museums with prehistoric, archeological, art and naval exhibits. The city is also an important religious center: Jews do pilgrimage to Elijah’s Cave, Christians worship at the Stella Maris Carmelite monastery, and for the Bahai Haifa (including the gold-domed Shrine of the Bab and magnificent manicured gardens) is their world center.