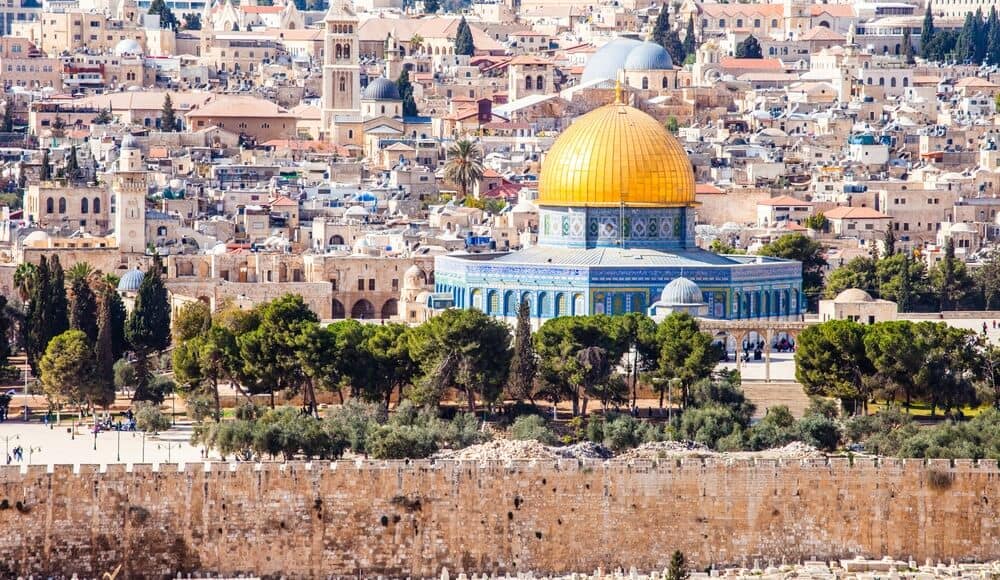 The capital of the State of Israel, and the ancient capital of the Biblical Jewish kingdom. It is holy for Jews, Christians and Muslims. Jerusalem lies in the Judean Hills. It contains the Old City, surrounded by high-fortified walls and ramparts, and the New City, modern Jerusalem. It was built over 4,000 years ago, and has been occupied by Canaanites, Jebusites, Israelites, Babylonians, Persians, Greeks, Romans, Byzantines, Arabs, Crusaders, Mamluks, Turks and British.

The Old City has four quarters: the Jewish, Muslim, Christian and Armenian. It contains the Temple Mount, site of the ancient Jewish temples, and today the location of two important Muslim shrines, the Dome of the Rock and the El Aqsa Mosque. On the western side of the Temple Mount is the Western or Wailing Wall, the holiest of Jewish sites, dating from the Second Temple. In the Jewish Quarter one can stroll along the Cardo, the restored main street of Byzantine Jerusalem, and visit ancient synagogues. The Christian Quarter contains several famous churches and monasteries, especially the Holy Sepulcher and those along the Via Dolorosa.

The Muslim Quarter is the commercial center of the Old City with its colorful marketplace. Mount Zion is the site of David’s Tomb and the Room of the Last Supper. Outside the walls one can find the excavations of David’s City, the Mount of Olives and many beautiful churches and monasteries. The New City is the site of the Knesset, Israel’s parliament, and excellent museums: Yad Vashem, the museum dedicated to the Holocaust; and the world-famous Israel Museum.