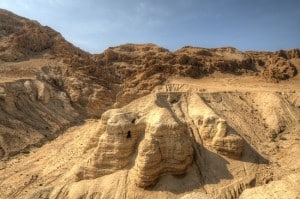 The remains of a settlement dating from the Second Temple period, on the north-western shore of the Dead Sea. It was the residence of the Jewish religious sect of the Essenes, who wrote the famous Dead Sea Scrolls, which were discovered in 1947 in some caves in the area.