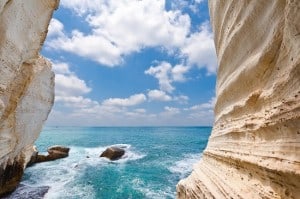 A chalk cliff on the Mediterranean coast of the Upper Galilee, at the Israel-Lebanon border. Marvelous grottoes (accessible by cable-car) have been carved out of the cliff by eons of wave action. This is the so-called Ladder of Tyre, which carried one of the most important roads of ancient times, between Akko in the Land of Israel and the Phoenician city of Tyre.